FIVE HEARTS-- It's like it was written for me... 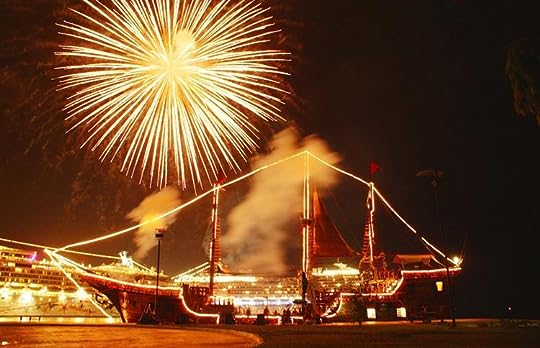 Pirate fans? This is the book for you. I can't believe how wonderful this book was. And as I look through my pages upon pages of quotes, I can't help but gush from this novel. (Seriously, I probably highlighted a third of this book)

New-to-me author Jules Radcliffe delivered historical kinky pirates with action and adventure. "Perry" aka Lieutenant Thomas Peregrine is an uptight Puritan British naval soldier ordered to be on buccaneer (pirate) ship, Audacious. Pirates and the British are working together, pirates no longer are considered against the King's army with proper documents. But on Audacious, led by the famous captain Black Wolf, no one trusts Perry.

And Perry doesn't make it easy to be liked. He is quiet, judgmental and with the former quartermaster, Irish Gabriel Quinn, he can't seem to hold his tongue. There's been animosity between the two from the moment Perry stepped on the ship. Enemies that are filled with passion can make the best lovers when they put their mind to it.

Quinn saves Perry one night and the passion takes a sharp turn into more. The thing is the story is not linear and the sexy times happen fairly early. It felt like the culmination already happened in the beginning. I warn of this because the story isn't written linearly. And if you need the story to be straight, you'll be disappointed. The story uses flashbacks to help flesh out the plot. The characters come in their own as the story moves along.

How so? The gift that is Perry's submission and his acceptance of his needs, Gabriel's mastery of Perry is showed a thousand times fold.


"Gabriel, what I give to you cannot be taken; 'tis a thing you've earned. To submit is my gift to you, and pleasure is your gift."

At only 22 years old, Perry has had a hard life. He's been used and abused (trigger warning: off page abuse, torture) and he carries the scars, figuratively and literally. Gabriel knows his man and follows Perry's cues.

The flashbacks show when the men originally met, Perry's start in the navy. Also, how Quinn left the Audacious to be another master on the female led pirate ship! I wondered how could the men have so much chemistry if they weren't on the same ship. But their chemistry is just that palpable.

The novel isn't just sex. There are pirate ship fights, double crossing, some suspense and cool adventurous rescue! The author interjected wit within historically accurate dialogue. I'll admit the dictionary function on my Kindle became my BFF while reading this book. But I wasn't lost.

The enemies are the Spanish navy. And they show themselves while the pirate crew are on the open seas. And the novel got a little dark which enhanced the entire experience. While the action and adventure satisfied the pirate lover in me. It's the romantic side that gutted me.

"God, but I love being inside you," he whispered in his own tongue. "So perfect, your body iron hard and petal soft. So beautiful, your satin mouth, your starlight eyes, your silken skin. My heart beats for you, sings for you."

Gabriel, the rough and tough Dom with a heart of gold, was possessively smitten by his needy kitten, Perry. Perry knew his was submissive, but Gabriel nurtured that side. Gave his boy just what he needed. And it was kinkly delightful: CBT! Bondage! Spanking!

I haven't been this pirate satisfied since Caged.

The writing is very strong, the tale entertaining. I didn't want it to end.


"They'll know I tamed you, and it's no secret I've a liking for rough play. But exactly what goes on betwixt us?" [...] "Your submission belongs to me alone. But everyone is to know you're mine, and no one else is to lay a hand on you. No one."

And that ending? Fitting for the time and just swoon-worthy. Matelot squee!

If I had to nitpick, it got a tad schmoopy in the last bit. But overall, this novel is stellar. It's on my 2017 favorites list. The author took time to detail without making it drag, the research is very evident. And a lot of showing how the characters choose the paths they follow.

And this pirate will battle ye if ye say nay!

Arr! Just kidding, mateys. I'll love this book even ye'll not love it.