The premise was promising, the execution... 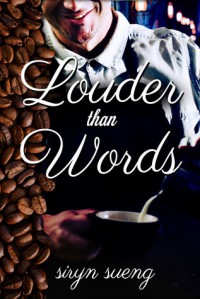 You know those middle of the road books where the blurb has the potential, then you read it. Now you're left in the middle of escaped potential and okay?

That's me after reading Louder than Words by Siryn Sueng.

Nice premise that I was very interested in reading, a main character with a disability. Set in present day Florida, a shy physics teacher named Derrek has been visiting the Starbucks by his school just to get a glance of the hot barista with dreamy green eyes, black hair and multiple ear piercings named Alex. It been months and he was too anxious to make his move... until now.

The meet-cute is adorably hilarious and sweet. Derrek stumbles, Alex stares but doesn't speak. Assumptions are made but a boost from both men's friends help get the pair on the right track. Alex has vocal cord paresis. A vocal cord in paralyzed, his voice isn't strong enough. So his primary form of communication is sign language.

Derrek needs to learn because he wants his guy. So why not ask Alex to teach him? Who better?

The novella had pangs of first-book-itis: it ended at an odd spot and there was no conflict to carry it to the end.

How could this have been better? The author wrote in 1st POV from Derrek's POV only. He's not interesting enough to carry the story. The writing had a tendency to get passive. Or it would re-describe the original point made paragraphs ago... muddled the book.

If the story ever gets re-edited and lengthened - adding Alex's POV would add to the plot. The reader is relying on Derrek conveying Alex's actions and perceptions and even Derrek comments that he can't get a full read on Alex at times. Dual POV would make the internal angst of falling Derrek and vice versa would be the only conflict needed. The story got dull once they fell in love and it dragged. Then a late minute secondary character is added - Kevin. He served no purpose and if you take him away, the story is stronger. The second half was weak. I was swimming in the 3 Hearts range until Kevin and that wreck of a plot twist was added.

The writing needs work. An example being the sign language sessions. The story time jumps a month and half in the future with both men meeting consistently each weekend. After a month a half, they should have moved passed the introductory phase but the dialogue suggests they're initially meeting. These inconsistencies are peppered throughout.

The cute parts are the strongest: the original meeting, the sign language sessions. Also, a strong part: not cheapening Alex's disability.

Overall, a cute story with lost potential. I liked the main characters. I just wished they were fully developed.