Gearing up for my fave author's first MM! 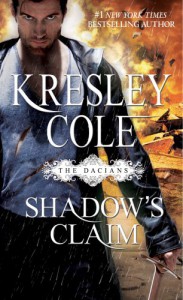 I think my love for this author's words are well documented. She's definitely one of my faves.

How? I'm still reading a series after how many years now? A decade? Little over, under?

I just open up the wallet and send over my ducats to anything remotely IAD related. I own the series, or the series owns me? Hmm...

So the Dacians...borne from one the best frigging vampires EVER, Lothaire. I will forever <3 this evil, diabolical creature. And the Dacians, his royal family are intriguing.

I finally got to this story so I can be prepared for Shadow's Seduction, Cole's first MM!

So how was book #1? The Dacians, Salem and Lothaire saved this story.

Princess Bettina of demon realm Abbondae, half demon/half Soceri, pines for the unattainable, her childhood best friend, the demon man whore, Caspion the Tracker. They've just become immortal (that's how young these two are which helps explain why they acted so...young for lack of a better word). But Bettina's crush/love for Caspion is not returned nor will it ever be. And you can read between the lines from the start he was not attracted to her. He's the star of book #2 which answered the vibes I got from him. (The hints Cole wrote as well helped. ;P) Bettina is ravaged by a bunch of Vrekners and nearly dies.

Does she avenge her attack? No. She suffers from anxiety and PTSD. (This I had no issue with)

Prince Trehan of Dacia, is a cold blooded assassin that is the 'sword of Dacia'. Due to Caspion's meetup with a royal Dacian cousin, Trehan leaves to hunt the young demon down and finds his Bride who bloods him...Bettina.

Bettina is a close second.

Two heroines whose mates are too good for them, IMO. The only Soceri female who is worth rereads is Melanthe. I <3 her to pieces. Bettina was a doormat. She whines, rolls over for her guardians and lets everyone else rule her life. She is the next in line to rule the kingdom but she doesn't act like it. So soft.

Cole uses another 'immortal to the death tournament' plot device with virgin Bettina and her kingdom as prize. So it was like reading reused tea bag tea. Because you can read the same kind of tournament in the first bunch of books from Immortals After Dark with stronger female characters.

Granted, the tournament was entertaining with Bettina's guardians/ godparents as side characters. There is something about Morgana, the Queen of Sorceri that is funny to read.

And Salem, the foul-mouthed, cockney speaking, invisible phantom? I could read him all by himself, he was so entertaining. What a crass pervert! Loved him

We do get more of the vampire realm, Dacia. Their history is interesting. Trehan was a great hero - patient, calculating, confident and in love with an obstinate woman who thinks a crush with her uninterested friend is the best thing since sliced bread.

And Caspion was a dick and not worth the infatuation. I understand why Bettina was infatuated in the beginning, first crush, etc But c'mon...

he's sleeping with other people --they never made any promises

So the impossible becomes possible, hot near sex (and actual sex happens), Nix shows makes a cameo--doesn't say a thing but my Valkyrie loving heart was ecstatic for the bit role she played, and LOTHAIRE shows why he's KANG for like 5 minutes.

The story ends with a HEA, an obvious send off as to who will be the players in book #2.