Pardon me, is that a Pretty Woman-esque Romance in your pocket? It's an international unicorn gang bang review with Sheziss and Adam!

"Am I your only client tonight?"
"Client?" Zac regarded Liam through a haze of smoke. "This ain't Pretty Woman, mate."

First things first, I haven't read a Garret Leigh before this, so I don't know what the standard or normal quality is. Consider this a virgin review, you dig? (Just about the only thing virgin in here. I kid. I kid.) Leigh is another author I've been meaning to read and it takes a review book to finally pop the cherry.

But the blurb was a SRAL magnet mathematics equation:

1 grieving widower (I want to lick your sweet tears)
+
1 rent boy (I swear a trombone plays every time rent boy is mentioned around me)
x
Damaged, lonely men = SRAL jackpot!

Garrett Leigh did a great job telling a story that wasn't as dark as I originally thought it would be. Instead, it wasangstyish, no way minimizing real life situations. But it had the rent boy romance fairy tale effect going on here something fierce.

Zac, the 23 year old hooker reminded me a lot of this pic: 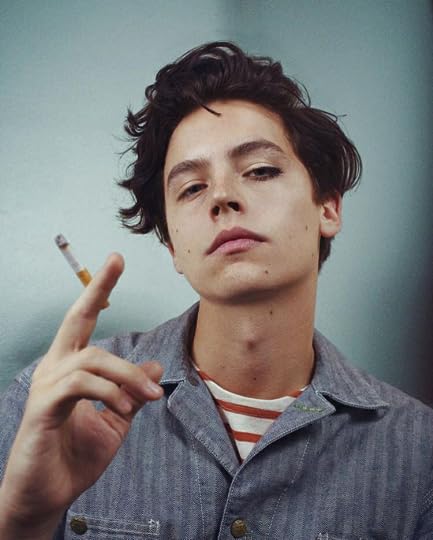 He's been through so much through his young life, and yet he still keeps going. Liam was supposed be an attractive john, wank fodder to push Zac through his dark days. From day one the two men have enough chemistry to light up the Eiffel Tower.

To read their business/sexual relationship progress into a meaningful one a great read.

"Instead Zac found himself rushing to obey his gentle commands, every instinct screaming at him to make Liam happy because pleasing Liam did amazing this to Zac's heart.
That, and he had a feeling Liam was going to fuck his brains out and he couldn't bloody wait."

There is a lot of sex. (It's a story featuring a sex worker, the reader is taken along to the aftermath of some johns) But I never got tired nor did I think it was too much for the story.

Zac and Liam try to deny each other but that electricity they share can't be denied for long. The way Zac would understand Liam's loneliness added nice touches to the story. Do I wish the couple spent more time together? Yes. But for some reason, it worked for them.

I liked Liam. He was white knight all the way and I was swept up in the fantasy of him, even if he was a surfer (I'm not into them, sorry surfer lovers). I really liked Zac. I liked his tenaciousness, even if I don't think he thinks he is. That spirit that overcomes drug addiction, survived a crap life in the system and streets...he's a wonderfully flawed character.

There were a very few twists that slowly unfurled toward the end, some that I did not see coming. Some parts were a little predictable: the fairy tale ending and way everything is neatly wrapped up in a bow. Jamie made for a good secondary character. I hope the author revisits and shares more info about him in his own starring book. The Brit slang and ease of tone proved the author has a deft hand with writing. The way it didn't get into heavy melodrama, instead letting the main men and their lives lead the direction of the book proved it to me. It wasn't the most remarkable rent boy romance I've ever read, (it's 2016 and rent boy has been done to death though I never tire of it). But it was a solid rent boy romance.

And a rent boy romance wearing the Pretty Woman swirl and a happy ending (no matter how much the story tries to deny it) always makes me stops in my tracks.

The story is a solid 4 Hearts. The fact that I can't seem to stop thinking about the main characters days after finishing? It deserves an extra half heart. I definitely won't wait too long to read another Garrett Leigh.