That little fucker got under my skin I tell ya! ;P 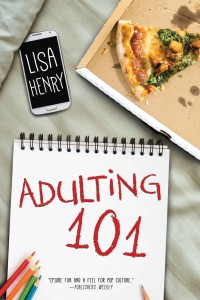 It's a unicorn group review with Adam, Cupcake and Sheziss

"Are we Netflix and chilling?"
"I don't know what that means."
"Are you twenty-five or are you eighty-five?"
"Whippersnapper."

Adulting is hard as fuck, yeah?

I mean I am one and I totally can say it's a struggle. The struggle is real.

Some days all you wanna do is this:

And adulting just comes in to ruin your day wearing a respectable pinstriped suit, waving responsibility and bills and less fun things like it was going out of style. :/

They're probably going to be fifty-eleventy gazillon reviews on this book (including our group review) because it's Lisa Henry. And a light Lisa Henry which makes it more special? I'm still new to the LH bandwagon but I've enjoyed myself with this story...though I struggled with Nick, the 18 year-old protagonist who struggles with adulting.

My relationship with Nick went through stages:

Y'know what? Nick was perfectly normal and adorable."

I overcame my struggle with Nick. He's so eighteen - full of youth, dumb and hormones. What a mix.

I think Henry captured a modern day 18 year old pretty wonderfully. And Jai? At first I was one #teamdoubt when I saw Nick lusting after a 25 year old. Because you know the main thing they'll be talking about it gential gymnastics.

But both men (*snort* I'm calling Nick a man very lightly) were on an even playing field. Adulting 101 is set in Franklin, Ohio. It's the summer before college and Nick is struggling with coming of age. And Jai...he is sort of dealing with his issues. The two start a fuck buddy relationship in one very HEE-LARIOUS scene. I refer to it as the holy sheet 8%.

And while they "Netflix and chill" and try to keep it light, they're drawn to each other. Nothing major heavy, nothing too serious. And it was a pleasure to read. I think that was the magic of Adulting 101. It's relatable, it's funny, it has some honest moments. But the way Nick and Jai realize their fuck-ship is something more without making it too crazy, that was my favorite. New Adult is a fave genre and I think the author captured all the great key elements to make this work. (The texting was an excellent touch)

The side characters, though? Dude, they were excellent. For serious. Everyone one of them from the codependent BFF Devon, to the entire Hazenbrook family (down to the littlest one, Noah) to Chris' dad. he might come off as a pencildick at times but he meant well.

There are hot moments, especially when they were interrupted. Especially the interruptions [Pretends to ignore my exhibitionist kink] And the laughs were a great balance. I'm not a fan of books that try too hard to be funny. This book read closer to effortless than not.

And the ending? I was a little worried the more I got into the novel. I really got into Nick's head, I sympathized and have been there in his shoes. I think we all have...except for those types who know exactly what they're going to do for every damn thing, But it couldn't have ended any more perfect for Nick and Jai. It's a solid HFN.

I think Nick and Jai passed Adulting 101 with an A.

Fun, light, with a sprinkling of realism...couldn't have asked for anything more.