A 'fence book' if you will 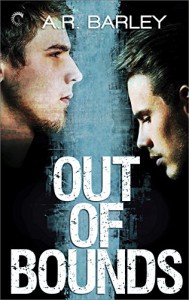 Dear "Out of Bounds",

After being subjected to that phrase a gazillion (maybe less than gazillion but boy was I smothered), I'm just going to refer you to as OOB. Are you cool with that, OOB?

It's cool. I'm not a hugger anyway.

OOB...*deep breath* I want you to know something. I like a good number of genres but New Adult has a special place with me. See, I gorged myself when the genre was in its infancy. Imagine all the het college romances that is. And I'm not going to lie, OOB...I might revisit from time to time. Because I sometimes like to read about the crazy kids juggling trying to adult, life and a borderline ignorant alpha hero mixed in from time to time.

What? What was that? Oh you think you have a possessive alpha in this novel? Really? *smirks*

OOB, I'm going to get into your 6' 6" alpha-ish main character, Nick Moretti, soon.

Let's get the triggers out the way, huh OOB? Triggers: gay bashing, PTSD

OOB is a first time MM venture by het romance author, A.R. Barley. Set in New York, it starts with nineteen year-old Jesse who was gay bashed by his roommate. He is rescued by a buff, hunky older RA, Kelly and placed in the only open spot in the senior dorms. His new roommate, Nick Moretti, is older by 5 years, has a past (abandoned by his only parent in his teens, on the streets since) and doesn't do relationships. Nick is the antisocial bear to Jesse's twink virgin. Sounds good, am I right, OOB? Who doesn't love reading the antisocial, gruff, big guy who can't emote?

OOB? After reading you, you're what I call serviceable.

I don't think you'll appeal to every MM reader, probably best for first timers who are crossing over from MF.

OOB follows a tried and true plot device - start with with a damaged protag, place together with a "bad boy" alpha-like male, have them talk but not actually talk, insert outside drama and voilà, you have a relationship. But underneath the candy coated facade, there are cracks, OOB. And sometimes, the story can be good enough to outshine the story's flaws. Not the case with you, OOB, that tape in the middle of the room trick could only work for so long.

Nick is allegedly a thug and I'm guessing street smart but...I've had sandwiches that were more street savvy, OOB. He wouldn't last on the streets for long since he told more than did anything that showcased his alleged tragic past. Living on the streets would have made him tougher, no?

Now, I left the MF New Adult lane years ago because the plots became tepid copies of one another, OOB. There was a certain writing style that became more prevalent - more emotional based, relying on drama to get the story moving kind of style. The external conflict would have no relevance to the romance sometimes.

Can you believe it, OOB? Well pick up your lip, because you had this going on at times, OOB.

I know, I know, you had some things going for you. You were very easy to read. Super easy. And the friendship development between the main characters was nice. Granted, the sex was hot. I mean, frottage and handjobs always has that certain something. I'm a fan of the hands.

So for OOB, you get a B for the sex. Wear your grade with pride.

They weren't written to their potential. I didn't like the way Jesse spoke sometimes especially to his mother. Kelly, the savior RA, played a major role in Nick's life and it was kinda mailing it in toward the end. Wasted potential because there was too much telling. FYI, OOB - you're a first timer in the MM genre. I'll make it real easy as an example - if you and I were a couple and our straight friend offered to be a third, do you think that would be acceptable? No? (Better not be, OOB, I'm a little possessive.) So why would a gay friend offer to be a third in Jesse and Nick's relationship? Why would a gay stranger ask that too?

OOB, you know what would have made you a better read for me? Nixing the ridiculous external conflicts. Your main characters were supposed to have enough development to carry the story. You don't need silly bar fights, non communication after the main characters talked for weeks and ridiculous misunderstandings. You cheapened the story with that stuff.

You had some inconsistencies too, OOB. Don't look at me that way! You're the one that had your characters saying "out of bounds" every other minute in between wearing cherry lip balm all the time! You made me hate cherry lip balm for an entire day from your overkill. Once or twice is fine but anything more than that is redundant. And that purple prose, OOB? You got really flowery at times and I doubt many 19 year old boys would speak in some of those older terms.

And what's up with wearing feminine like clothes as a punishment? Not cool, OOB. Besides it not being cool, if Nick works in a drag bar, why would he see it as something bad? Or how about Jesse suffering from PTSD including having panic attacks yet he has no problem traveling in a plane across country. That's a 6 hour flight, OOB. He nearly passed out from strangers touching him and states he doesn't want to be in enclosed spaces...so when you figure that out, get back to me, okay?

The story had cute moments. It got the job done. Doesn't really offer anything memorable. And the PTSD and angst is too easily overcome and solved, OOB. The villain just apologizes after his homophobic slurs and all is forgiven. Really? The victim just lets their tormentor get off like that? You just--

Look at me. *smh* I could go on and on about your flaws, OOB. But here's the thing, there is possible potential in this writing. I mean I'm possibly going to read your sequel, OOB, though if the writing style doesn't improve (oh dear, I'm afraid there will be kink brought in), I'm pretty sure I'll be out...of...bounds.

Damn it! Look what you made me say!

OOB, you seriously have me considering creating a shelf titled - "fence books" - you know where I could probably talk myself into loving or hating it. I'm so in the middle of the fence with you.

OOB, you're best for NA lovers who don't mind underdeveloped characters and like this type of writing style, those looking for a quick escape and don't want to bust their brain.

For a first time MM book, it could have been worse.

Bet you're happy we skipped that hug.

P.S. Try other flavor lip balms once in awhile. There is more to life than cherry.