I love Alex!!! And his b-hole! I love them together and apart (mostly together)! 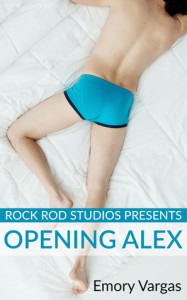 “You’re already a mess,” Andre says. One thumb reaches Alex’s hole and presses right in with a sliding burn. “And sloppy wet for me.”
“Fuck,” Alex says. His body moves on its own, hips rising, head jerking back. “Oh fuck.”
“Like that? Want Daddy to finger your wet pussy?”

The one where Alex finally gets his butthole plundered!

Oh this was such a good continuation! (Yes, you must read in order) Our lovely, clueless (well he's a little less clueless about a few gay sex acts) Alex is "gay for stay" and ready to graduate to removing the virgin status of his anus. (I'm pronouncing it with a fancy sleazy accent a-noose)

He and Peter, the sub who has problems with ending a scene, are getting closer in "Opening Alex". Can I say I really love the title? Because I do. In this edition, Alex and Peter form a sort of fuckbuddy/friendship with room for more? Peter has layers that he tries to cover with a smile and Alex is slowly uncovering them. Can you believe? But as I said in my review of #1, Alex can be smart sometimes.

The clerk at the pharmacy gives Alex a subtle double-take when he drops a bag of gummi bears, a can of unscented shaving cream and a disposable enema kit on the counter. He spent nearly half an hour dicking around in the personal care aisle putting off the inevitable, but it didn’t do much to calm him down.
Is this how girls feel when they’re buying tampons? Probably not. Because tampons are for normal lady-stuff and this is for his first time getting fucked in the ass. Not that clerk knows that.

Alex and his asshole are quite the pair. It gets cleaned, shaved, fingered, called "pussy" *grunts*, lubed, fucked, and fingered some more.

I just...damn the quotes are still as solid as the last book. C'mon:

“Sweetheart, bend over a little,” Cory says. “You’re hiding your rosebud.”
He’s pretty sure that means his asshole, and then he knows it does, because as soon as he shifts his legs and bends, bracing himself against Peter, he feels the slim tip of the applicator.

The same cast of characters as last time and just as funny.

And...and...one of my fave dirty talk words was used. I might have (definitely) twirled.

“You weren’t complaining about cheesy when Andre was rhapsodizing about your manpussy.”

If you enjoyed Rock Rod Studios Presents: Alex Undone, you'll definitely be happy with "Opening Alex." Wanted a little bit emotion from the main characters? You have it. Wanted some sex? Look at my quotes. Want more Alex and Peter? I'm thinking of inventing a ship name for them, they're so adorable.

“So. Is it a brand new world? Has your plundered hole given you a new outlook on life?”

Yeah. Yeah it has.