A little smidgeon of hope from ultimate sadness. 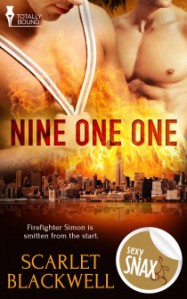 I won't rehash the events of that day. But it's an open wound on America.

Thirteen years and a few months later and I can still remember that day. Remember the following weeks, watching the despair from real life victims' family members and those on television. I can't even watch a movie about that day to this day. And I kind of psyched myself on reading this story to see if I could do it. I tried reading another romance that featured 9/11 events, a few years ago and couldn't do it.

Now years later and I tried a different romance by an author I'm familiar with...and I finished. I zoned out while reading a few flashbacks, couldn't help comparing to what I remember from that day. (I wasn't at Ground Zero, let's say 50 blocks away or so) My reaction to this story might be a little skewed compared to another reader. Can't believe I'm sharing so I'll leave it at that, please. :)

I found the story was typical Scarlet Blackwell - angst, heaving alpha men, a mishmash of a British America (seriously, Totally Bound - an American editor can help edit these Britishisms out of a book that is supposed to be based in America), a conflict that seems to be not easily resolved but a bridge is built by the end to seek an answer and a fitting ending. I don't think it was her best work. Good enough for what she set out to accomplish: a man grieving for his dead lover finds possible love in NYC ten years later at Ground Zero during the holidays.

Damon is ex-NYPD, living now in Montreal, away from the agony of losing his love, Justin that summer day on 9/11. Justin was a firefighter who died trying to save lives. Damon has been celibate for ten years, still a mess, refusing counseling and not dealing with his ghosts. On Christmas Eve, he meets another firefighter, Simon in a bar. And though he tries to avoid the man, fate keeps putting these two together.

Now I understand what the author was going here but I had to suspend my reality because I doubt these two would actually keep meeting each other so easily. Maybe it was the magic of Jizzmas that brought them together? And semen sorcery for those men being able to come so much. Maybe it could be said for a certain someone's ten year drought but I used my reality-suspension rubber band to believe that bit.

Damon's internal struggles with finding another man attractive was...good enough too. I like reading about love being found after loss, so it had the right ingredients - inner turmoil, self loathing, grief, guilt. Did I buy the entire story? *side eyes* Yeah, I guess it's alright.

Overall, a sad and hot number. The author did research the events and included Ground Zero info. And she wrote romance and made something happy from that...wound.

Pretty decent read. I enjoyed the key elements of the romance. A little over dramatic at a few parts which this author is known for. Compared to some over the top antics I've read from her in the past, the antics in this book were muted. I enjoyed the ending the most. It ended with a beginning, a promise of more. I do hope those two find love from what feels like a hopeless place and maintain it. I'd say it's a tentative HEA with room for more.

Maybe I'll try to give that other romance a chance in the near future.

A copy provided for an honest review.
Tweet
5256 BOOKS
FacebookTwitterGoodreads